While venturing through the catacombs somewhere in the depths of the Ruins of Nethermore the other day, we stumbled across a strange set of notes. They seem to be coming from the pages of a diary. In fact, someone suggested, they might be a diary entry from the great elven wizard Tesselar. 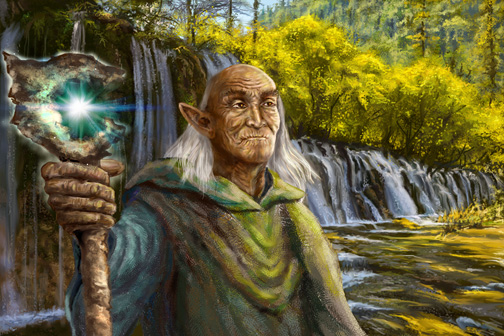 Long and heated discussion broke out over this suggestion here in our offices, but the more we did our research, the more it became evident, that the handwriting does indeed seem to match that of the legendary Tesselar. We also discovered hints in various reports that the elusive wizard-who-walks-the-ages has been seen approaching the Nethermore Mountains some weeks past, shortly after the initial outbreak of the undead plague. Tesselar’s appearance is significant, of course, in many ways, because the wizard magister had not been seen for many years prior, and the only explanation for his presence in the Nethermore region is that he has been following the same goal as ours… to find the source and stop the horrors of the walking dead, just as these mysterious notes indicate.

You are skeptical? Well then, read for yourself…

Earlier today, I reached an intersection in the tunnels deep beneath the Nethermore Mountains. The stench that lay heavy in the air down here was so overpowering that my knees began to buckle. I had to lean heavily on my staff as bile rose in the back of my throat, triggered by the stench of decay and rot that surrounded me. I was wrestling with the many emotions that flooded over me at the sight that lay before me. So bizarre was it that I have to commit it to paper in detail. No part of it must be lost or forgotten. For some reason, I have a sense that what I’ve been looking at is more important than it may seem just now, and I may need to rely on my notes at some later point.

The path before me was rough. Here, deep beneath the Earth, the bedrock had chiseled its own path, the force and sheer weight of tons of granite forcing itself between the old walls of the catacombs, creating deep rifts, and cracking the overhead structures with ease. I was surrounded by silence, except for reluctant drops of water that echoed in the distance as they dripped to the ground. The soft, shimmering light from my staff struggled to penetrate the darkness before me.

The peaceful silence was deceiving, for I was surrounded by at least one dozen animal carcasses; cadavers that appeared to be clawing at each other even in the moment of death that had caught up with them no more than two days ago. Reluctantly, I stepped toward the rotting flesh, careful not to trip on the brittle ground. Wet and black from the sewage and blood, my rope was steeped up to my ankles. As I looked closer, the light of my staff revealed that these were no animals. At least not ordinary animals. Their rat-like bodies were decidedly humanoid and must have been at least as tall as a man. The cadavers were clad in armor and carried weapons, as far as I could tell from their shredded remains.

As my gaze roved across the floor I noticed another dead creature among them. Amongst the rat-like warriors lay slender, insect-like body parts, their severed heads staring at me with dully facetted, expressionless black eyes. What a massacre… what rage… not a single victim that was left intact.

But then, from the corner of my eyes I noticed a single rat, somewhat separated from the others. Lying partially obscured in the shadows, this one was not humanoid, but instead it was enormous… easily the size of a fully grown Worg. The animal had deep cuts on its head and hideous lacerations along its flanks – wounds far beyond anything that healing powers could salvage, and yet, a last dying spark of life was still glimmering in the eyes of this animal.

I took another step closer and slowly reached out my hand. I could sense the animal’s wealth of emotions. This was clearly no ordinary animal. Its sense of sadness swept over me, so profound that it threatened to bring tears to my eyes. I felt its exhaustion from the battle and the deathly wounds. It was intelligent… comparable to the mind of a child, perhaps, but intelligent nonetheless. And it was dreaming… the feverish hallucinations of a life dwindling away with every heartbeat.

I had to know what had happened here! Especially in light of the fact that I have to continue on this path through these very catacombs. I gently place my hand on the animal’s matted fur, right between its dimming eyes. Only barely did I register the saddle on the animal’s back at that point, because already, its confused memories that wound their way through its dying mind began to appear before my own mind’s eye. 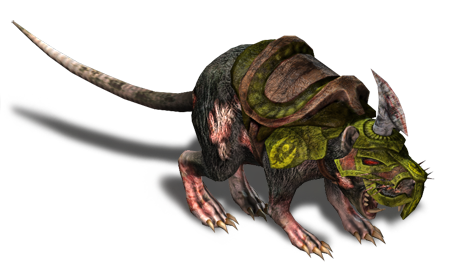 Giant rats were battling in the ruined halls of some ancient temple. Side by side with their humanoid, armor-clad brethren, the giant rats fought with the desperate ferocity of cornered animals, as wave after wave of their opponents broke upon them. Humans! The images I saw were blurred and out of focus, and I felt the animal was passing quickly now, its heartbeat already slowing to a crawl. Among the carnage I witnessed an opponent’s torso being ripped to pieces, its human body crashing lifelessly to the ground. As it lay there in rivulets of crimson blood, it began to regenerate itself and the corpse rose yet again to continue the fight. As more and more rats fell, the odds became overwhelming, and before this horde of relentless, undead warriors, the surviving rats eventually fled into bottomless pits and uncharted sewer channels to escape the bloodshed.

That is where it all started, I realized! The undead flood. The walking dead. The ancient temple ruins. This is where I will have to go!

Another image appeared before my mind’s eye just then, of another battleground. Dank cave tunnels this time. The rats were tangled up in fighting yet again, only this time without their humanoid brethren by their sides. An emotion came with the vision of the battle scene, a different sensation… hunger. The rats were starving. I witnessed as flitting images of eggs danced before my eyes. Food for the rats, much of the shells cracked and empty. Food aplenty. And there were flashes of weapons! Guards! A number of insectoid creatures, heavily armored in their chitin shells, were pummeling the rats, slowly driving them back, away from the eggs. A froth of saliva shot from the insect creatures’ mouths like projectiles, as they poisoned the rats, paralyzing them and finally capturing them as they lay helplessly on the floor.

As I tried to piece together the fragmented vision that had spun through my mind, it appeared to me that the rats must have been pillaging an insectoid nest for food, when they were surprised by guards defending the nesting grounds.

The rat twitched under my touch, as its heartbeat became irregular. A last series of images flashed before me. The giant rat was fighting once again, but a strange red color tinges everything this time. I recognized the surroundings, the fight was taking place right where I stood… in these primordial catacombs… this very place… but there was more. In horror I observed that the rat was fighting its own humanoid brethren! Movement in the corner of my vision caught my attention and I was able to see her companions, fellow giant rats with fiercely glowing red eyes. Rats with saddles fastened on their backs, carrying the chitin monsters as they sliced the wooden pole arms of the humanoid rats with razor sharp claws. The humanoid rats were fighting back with a vengeance, but their expressions were unmistakable. They were horrified and stunned by the fact that they were facing their own kin in battle.

Insectoids fell dead from their saddled thrones in the slaughter, but driven by some emotionless impetus, the giant rats continued to fight their own brethren tooth and nail. With sharp claws they pulled the humanoid rats to the ground, then ripped their throats with blood-stained teeth. All the while, their brethren fought back vehemently, piercing their attackers’ lungs and stabbing them to death with daggers made from bones. The massacre ended when all humanoid rats lay dead, when most of the chitin monsters had ceased to breathe. The few who lived moved on, down the tunnel to nurse their wounds. Only this lone rat remained, dying…

When the last of its life ebbed from the rat’s body and its skull slowly grew cold under my touch, the enormity of what I had just witnessed jerked me back to my senses. The path that lies ahead of me had just become a whole lot more challenging, for now I know that there is not only the plague of the undead to deal with. The dark tunnels ahead of me hold promise of a violent conflict between two different races. A conflict I do not wish to be dragged into. But I realize that, in time, my hand will be forced and I will have to choose. But what choice will it be?

6 Replies to “Mysterious notes discovered in the Ruins of Nethermore…”