A few weeks ago we ran a small focus group among Deathfire fans, as you may remember. Many of you have been eager to hear about the results of this focus group and as I had promised, %%% % % % today I want to share with you a closer look at the outcome.

The focus group was designed to help us find a final name for the game. Deathfire has always been a spur-of-the-moment kind of name that we used as a project title for lack of a better alternative. In the time leading up to the focus group, we made lists of other titles that we liked, and began whittling them down. We voted over and over again to slim down the selections, and to get something that we felt represented the game the best.

Then we put together a series of questions that would allow us to gauge people’s response to certain keywords and names we had on our ultimate shortlist. And that is how we entered the focus group…

We asked people to give us impressions on titles such as Deathfire, Nethermancer, Endergast, Realms of the Beyond and Ruins of Nethermore without giving them any explanation what these words might mean in the context of a game. We simply wanted to get people’s reactions and thoughts on those words. The responses were very interesting and, in many ways, reflected our own impressions. But there were also some interesting and unexpected trends evident. For many, for example, “Deathfire” indicated a game that did not sound like a role-playing game at all. We had not expected that, but what was uniquely striking was the fact that almost everyone associated this particular title with an action-oriented game.

In the case of “Nethermancer” many of the participants felt the dark vibe this title gave off. Although many did not know exactly what a Nethermancer is, everyone understood that this is about very dark magic, automatically implying that magic would be the main focus of the game.

“Endergast” was an interesting one. It is the name of one of the villains in the game and we felt the name simply has a certain ring, even if it did not have a meaning per se. Most of the participants did not know what to make of it and responses were all over the place, as people drew from names that were familiar to them and remotely reminded them of the name. This often resulted in associations that had absolutely nothing to do with the game we are actually trying to make.

“Realms of the Beyond” also created associations that went beyond what we are making with the game, obviously giving participants an impression of a plane walker who travels different universes. In addition, it gave participants a sense of an epic adventure, of many worlds and mystical realms to be explored. Not quite what our game is, altogether.

The last option we explored was “Ruins of Nethermore” and, much as expected, it instantly created a classic RPG vibe with most participants. However, exact details fell into two ranks, essentially. One group consistently commented that they would expect a traditional dungeon crawler when they heard of a game with such a title, while the other group referred almost in unison about a mysterious city, lost civilizations and cultures, curses, magic wars and undead remnants. While neither exactly hit the nerve of what we’re doing – “Deathfire” is neither a mere dungeon crawler, nor does it truly explore lost civilizations – it was clear that it definitely hit the traditional fantasy role-playing mark.

At this point the participants still did not know, exactly what these terms/titles meant, so we took them to a poll where we asked them to grade a list of titles. This would give us a base line and also an indication how “popular” certain titles were, regardless of how they relate to the game. Participants had to assign a grade to each of ten titles. Each grade was unique so it was not possible to have multiple favorites. We really wanted participants to commit to which title they liked better than the others.

The titles in question were once again “Deathfire,” “Nethermancer,” “Endergast,” “Realms of the Beyond” and “Ruins of Nethermore,” along with “Neothera,” “The Beyonder,” “Flames of Nithera,” “Bones of Endergast” or any title of their own creation, which they were allowed to write in.

The results were stunning. Honestly. We were glued to our screens in fascination as we watched the results come in. I don’t want to go into too many nitpicky details, but it was clear that there were a few titles our participants were simply rejecting. “Endergast,” “Bones of Endergast, and “The Beyonder” were titles that received universally low ratings, whereas most of the others were a mixed bag. As expected from the comments before, “Ruins of Nethermore” received high grades, as did “Realms of the Beyond,” surprisingly.

Then came the moment of truth. We explained to our participants what all these names and terms meant, and let them grade all the titles once more. With a new understanding of the terms we expected some change in how people would rate the titles, but to our surprise, it became a completely new ball game! 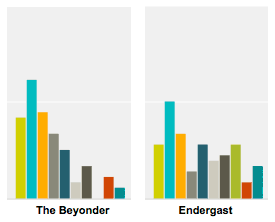 The opinions became much more polarized. Suddenly people either loved or hated a title. A lot of the middle muddle was gone and people now had real opinions. For us that was great news. When looking over the graphs that we made from the grades, we could now instantly eliminate titles such as “Endergast” or “The Beyonder” from our list. They simply did not jive with people. “Neothera” and “Realms of the Beyond” suddenly had a big hump in the center, meaning virtually everyone was ambivalent about them, and “Flames of Nithera” did not fare much better.

But there were also clear winners, and one was “Ruins of Nethermore.” Not quite unexpected after the feedback we had received in the first round. “Nethermancer” suddenly became much more popular as well, but the ratings indicated that people were truly polarized over this. The grades for this title were either really high or really low.

For us this was every bit as satisfying as it was surprising. For months posters in various RPG forums had been ranting against the title, and the constant dissent over the name had truly raised concern in us. However, if the focus group has shown us anything, it is that one of the key reasons why people do not seem to like the title “Deathfire” is that they do not know what it means. The numbers clearly showed us that once we had explained to everyone that it is the name of a horrific, outlawed spell, suddenly people took a liking to it. And strongly so.

Overall it was very interesting to observe how a little bit of additional information created a real bias within participants, how middle-of-the-road undecidedness became opinion that people expressed. The comments that came with the re-rating of the title, clearly showed that now people felt quite strongly about the names, and in the feedback section that concluded our focus group, it became evident even more so how people felt about the title of the game.

I should also point out that there were some pretty good naming suggestions coming in as well in the “Suggest your own name” part of the grading. One or two of them we really took into consideration but ultimately felt they did not represent the game well enough.

So, where does all of this leave us? Well, with the game’s final title. After reading and interpreting all the result and after taking all those comments and advice to heart, we decided to call the game “Deathfire: Ruins of Nethermore.” 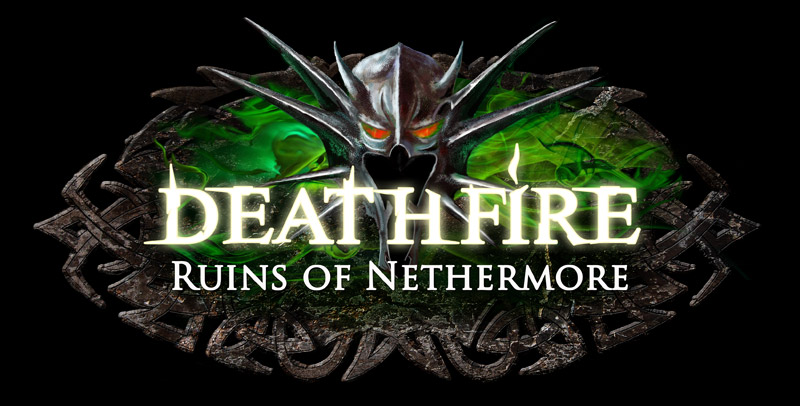 We decided to use a two-part name for a number of reasons. For one, it gives the game a more epic scope, indicating that it may be part of a series. While we do not have exact plans for future sequels of the game, there certainly is the possibility, depending on the game’s overall success.

The other reason we decided to use this two-part name was that it allows us to reflect the different aspects of the game. “Deathfire” is the part of the title that suggests a dynamic game, filled with combat and dark powers, while “Ruins of Nethermore” clearly plays up the traditional aspects of the game with a title that conjures up associations with classic computer and pen&paper role playing games.

As you can see from above, we also have a brand new logo for the game. It is a logo that we spent a lot of time tweaking and fine-tuning – and when I say “a lot,” I mean really, A LOT. We feel it nicely incorporates all the elements we think are important to understanding the game, while also having the power to stand on its own, representing the game we are making.

We hope you like the new title and the logo as much as we did and would certainly love to hear your comments, so don’t be shy and let us know.

With nailing down the name and the logo out of the way, now is the time for us to brand the game properly. This means, we need to get the word out into the world big time. And for that we would like to recruit your help once again. Help us spread the word about “Ruins of Nethermore” or “Deathfire,” whichever way you prefer to call the game now. Tweet it up, share the news with your friends, post the logo on your Facebook wall or your blog… just get active and help us tell the world about this exciting project we’re working on. 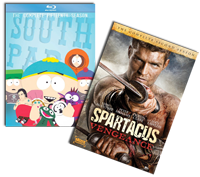 Interested? Well, just make sure you collect entries for the give-away below, and don’t forget, you can obtain more entries every single day for the duration of the give-away, simply by tweeting about Deathfire: Ruins of Nethermore. So, now, go out there and post the hell out of it. Spread the logo and the name all over the world!