For the past weeks we here at the Henkel household had a period where we went back in time, of sorts, and did a lot of re-watching of movies we hadn’t seen in a long time. It has to do with Lucas now coming into an age where can appreciate many of the movies that Lieu and I love, particularly the comedies.

So I dug through the countless boxes of DVDs in the attic and picked out of a few flicks we had not seen in a while and that I thought Lucas would enjoy.

Now, I have to say that I have not watched a DVD in about five years. Ever since I switched to Blu-Ray, DVD just doesn’t really seem to cut it any more, but what can you do when the movie you want to watch has been released in 1998 for the last time and has never been upgraded since?

Regardless of that, however, the thing that struck me the most was the memory of these early days of DVD. It reminded me of when we started up DVD Review in 1997. It was a time when the Internet was in its infancy, still. Hollywood studios had no email addresses, most didn’t even have websites yet, let away one dedicated to their home video

divisions. I remember sending out countless faxes to studios, getting on the phone with them, introducing DVD Review to them and telling them about our mission to help establish the DVD format as the home video format of choice. Some studios did not understand the concept how an Internet site could be of any value to them, but others had more foresight. I remember vividly that Polygram was the first studio to provide us with DVD copies for review. Kalifornia was the movie—and it had some serious compatibility problems, too, as I recall.

Boy, things have come a long way for sure in these past 15 years. 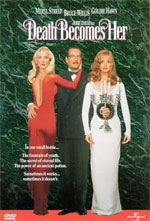 As we watched one of the films the other night, Death Becomes Her, to be exact, I stared at the screen in disbelief for a moment. That was a fullframe transfer. A pan&scan transfer of a movie, in fact, that was cropped on the sides… Oh boy, yes, there was a time when studios refused to release movies in widescreen. I mean, no, they did not accidentally frame films incorrectly, they outright refused to release them in their proper widescreen aspect ratios.

And the next night, another memory came back to me while I was watching a movie and the image seemed horribly rough and jagged; the subtitles looking like the font from a Commodore 64. Yes, indeed, there was also a time when studios refused to create anamorphic transfers and used only a fraction of DVD’s actual potential.

Boy, am I glad those days are over. DVD has come a long way. Not only have fully 16×9 enhanced widescreen transfers become standard, especially with the incredibly fast adoption of widescreen televisions, but fortunately with Blu-Ray and high definition video and audio, we are experiencing movies at a completely different level these days. If you don’t believe me, go back in your library and pop in a DVD from 1998 or so. Chances are, if the grain doesn’t kill you, the lack of detail from the compression will. I was very pleasantly surprised how well some of the DVDs held up, though. You can clearly tell which studios cared about their films, and which ones created nothing but shovelware. Even back then, New Line created some of the most sublime-looking DVDs, as I was reminded.

It was nice to revel in this sense of nostalgia over the past weeks. Remembering the early days of DVD Review and how things have developed. Remembering the role we played in the nurturing and establishing of the digital video format in the homes. Few people remember this these days, but websites like DVD Review were crucial at that point in time to carry DVD beyond the level of early adopters. With our web presence, the many screenshots that accompanied each review back then, the constantly updated news feeds, we made it possible for movie fans to stay on the pulse of what was going on in Hollywood.

I still remember, writing the headline “Paramount is in!” back in 1998, and the excitement that came with it, as Paramount used to be one of the biggest hold-outs on the format and this was a major push for the fledgling DVD format. You can still find the news article in DVD Review News Archive, which goes back all the way to 1997.

But one major studio was still sitting on the fence then. 20th Century Fox Home Entertainment. I remember meeting with Steve Feldstein during a trade show in July. Steve was one of the VPs from Fox at the time, and he was the one in charge of all of the studios’ home video marketing. Rumors were solidifying that Fox’s announcement of support for DVD was imminent, so I confronted him directly, telling him that I knew Fox was about to announce. He looked at me with a smile and simply said “Then you know more than I do.”

It kind of set me back, I remember, but I later learned that this was just Steve’s way of carrying himself. Steve would never say a word too much. He just isn’t the kind of guy you can pull into a conversation and hope to get information out of him that he doesn’t want you to have.

Despite his flat-out denial, however, not two weeks later, 20th Century Fox Home Entertainment officially announced their DVD support, and once again, DVD Review was on the forefront bringing this eagerly anticipated development to movie fans around the country. At this point, DVD was clearly poised to become a success—how much so, no one was able to foresee, however, and I think everyone was surprised how quickly DVD took off and established itself as the home video format of choice, making VHS and Laserdisc all but forgotten relics.

Gradually, the importance of websites like DVD Review faded, sadly, as the mainstream press began to pick up on the success of DVD and studios were more interested in pitching their release to E! Online and their audience rather than sites catering to dedicated movie fans, who would most likely buy their titles anyway—or so the thinking went.

I am looking back on those times very fondly. We made great friends during those years, among the Hollywood studio community, as well as within the creative community, and it is this fondness that keeps telling me to keep DVD Review alive, even after all these years.

One Reply to “A stroll down the DVD memory lane”