One by one they are disappearing
Friends, brothers, sisters, mothers, fathers
When they return they aren’t who you think

They look the same. They sound the same
But they are no longer the same…

The most unholy of spells incanted,
Undead fire burns in its victims’ eyes…

In a world without heroes
Who can you trust?

In a world where the dead are rising
Who can you turn to?
No one.
No one is safe

Can you save the world from everyone you ever cared about?

This, my friends, is the promotional snippet for Deathfire, designed to whet your appetites. Because of my vacations and all the stuff going on here, it has been a while since my last Developer Diary update, but today I thought, I’d give you a bit of a glimpse at the game’s story.

As you can certainly tell from the blurb above, there are some sinister things going on in the world. From villages, people are disappearing at random. Families are torn apart and the people are mourning and heartbroken.

But that is not all there is to it. At the same time, hordes of zombies appear and threaten the once peaceful villages. Flesh-eating monsters that tear into anything that lives. The worst part, however? These are the same people who went missing… These are the fathers, mothers, sons, sisters and friends… and they do not distinguish friend from foe. They simply… feast! 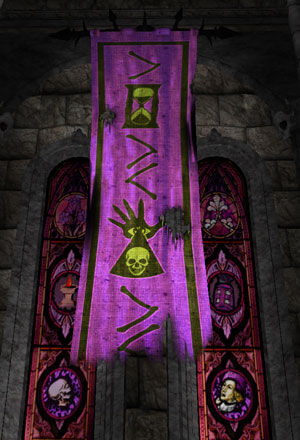 Rumor among the villagers has it that it is all the doing of an evil Nethermancer, who is hiding out in the hilltop runs of the old Apocryphic Temple. Abandoned long ago, haunted they say, and a cesspool for wicked and foul creatures, the Temple can no longer be reached directly. Thickets and forests, ravines and collapsed bridges make it all but impossible to reach the ancient structure. And yet, as its ruins claw at the sky like skeletal fingers, flickering lights can be seen among the walls. Shrieks of the tortured souls can be heard emanating from its crumbling walls and a strange, unholy glow permeates the place, as fell creatures prowl through the woods, spreading further and further, spewing forth the undead in a never-ending stream of walking death.

This is the premise of Deathfire, a story in which the Nethermancer Endergast has uncovered an ancient spell so devastating, so frightening that it had been banished for centuries. By burning his victims’ souls with an undead flame, he reclaims their bodies to do his bidding. He is gathering an army and soon, the legions of the undead will outnumber those of the living.

So this Nethermancer is really just a Necromancer, you may be tempted to think, but alas no, let me allay that misconception right here. The craft of Nethermancy is far more vicious. Unlike Necromancy it reaches out not only into the realms of the dead, but also… hey, what am I saying? I wont spoil this for you. You’ll find out in the game, because this is where you come in.

When your father has disappeared like so many before him, you rally a small group of adventurers. While you know there is no salvation for the poor souls taken and destroyed by the Nethermancer, at least you can try to put their bodies to rest and put an end to Endergast. And if you will find the same grisly end as all those around you, at the very least you died, trying!

This is only the “front end” of story, of course. The part that we present to you, the prospective player, in order to get you intrigued in the game’s premise. Once you enter the game you will very quickly find that there is a lot more to it. Nothing is as simple as it may seem and with many plot twists and turns, the story will quickly take on a much more elaborate and grander scope than you may initially suspect. In a way, I wish I could share with you many of the cool ideas we have prepared for the game’s plot, but that would truly spoil the fun for you. However, throughout the story there will be encounters with various other characters and I think in the weeks to come I may introduce you to a few of those. It may give you a better understanding of the various factions and key players in the game and hint at some of the dilemmas you may encounter as a player.

Meanwhile I hope this little glimpse into the game’s story has gotten your attention and will rev up your own imagination as to what Deathfire will hold in store for you. In my next update, however, I plan to give you an update on the Focus Group we did a little while back. Not only will I tell you in detail what it was about, but more importantly, I will break down the results for you so that you, too, can see how other role-players felt about some of the questions we posed. Naturally, the post will also let you know what conclusion we came to on our end, and finally reveal the actual title of the game. Remember, up to this point Deathfire has always been merely a project title, in reference to the Nethermancer’s horrific spell. So, stay tuned. Until next time…

6 Replies to “Let me tell you a story”