I am certain it has not escaped your notice over the past few months that I’ve been working on some game-related things lately. I am sure my posts and tweets about Unity were a dead give-away.

Well, I have decided that it may be time for me to share with you some of the things I’m doing, because with every new day that I am working on my current project, I get more excited about it. As you may have guessed, I am working on a new role-playing game. I have to point out, however, that it has nothing to do with Thorvalla, the project I tried to Kickstart a few months ago. Thorvalla is dead and off the table. There was not nearly enough interest and support for the concept to make it happen, so that continuing on would have been a fruitless endeavor. Instead, I decided to learn from the experience as a whole and move forward. 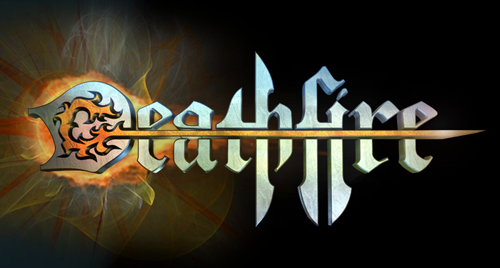 The new game I am working on is called Deathfire… for now. It is kind of a project title currently, but the longer we’ve been using it, the more it grew on us and there is actually a chance we may use it for the final game. We’ll have to wait and see. There’s going to be a lot of water going under there until we cross that bridge.

There are currently three people working on Deathfire. Marian Arnold is the lead artist on the project. Marian used to work for my old company Attic, just after we released Shadows over Riva, and he has a pretty long gaming history himself, working on games, such as the Divine Divinity series. What’s even more important, however, is that he is a complete role-playing buff and immediately jumped at the occasion when I approached him with this idea. Being such an avid role player, he often serves as a sounding board for me, too, while I design the game and bounce ideas off him. Oftentimes he comes back to me with comments, such as “We could do this and then do that on top of it, making it work even better.” So, all in all, I feel that Marian is a great complement for myself, forcing me to think, re-think and try harder all the time. The many code rewrites I had to do to try out and/or accommodate some of our cumulative ideas are certainly testament to that.

Then, there is Thu-Lieu Pham, who is also lending her artistic abilities to the project. Lieu is a classically trained illustrator and graphic designer, and her strengths lie squarely in the domain that oftentimes makes fantasy games so mesmerizing — the tantalizing look of characters and scenes. Many of you may recall the paintings she did for Thorvalla, such as the iconic dragon ship at sea scene that we used as the game’s main visual hook, as well as the female Viking character.

Currently, Lieu is busy drawing character portraits for Deathfire’s Character Generation. Instead of creating them in 3D, we decided early on to try and capture the look of Golden Era role-playing games. The covers by Larry Elmore, Clyde Caldwell, Brom, and Jeff Easley come to mind, right away. Call me old-school, but to me this kind of vivid imagery and paintbrush work is much more inspirational and engaging than a rendered 3D character.

And then, there is me. I am currently serving double-duty, designing and programming Deathfire. It is marvelously invigorating, I can tell you that, and it reminds me of the good old days when Hans-Jürgen Brändle, Jochen Hamma and I were making games such as Drachen von Laas, Spirit of Adventure or Blade of Destiny, the first of the Realms of Arkania games, which were, to a large degree, just the three of us working triple-duties, designing, programming and often also illustrating these games. Working with such a small team on Deathfire appeals to me very much and I am enjoying myself, perhaps just a little too much.

I’ve decided from the outset that I will be using Unity3D for the game. As you can tell from previous posts and some of my tweets, I have become a big Unity fan, as it puts all the right development tools at my disposal at a price point and level of quality that is unbeatable. The package has not let me down once so far – though I would like to say that 3D object import could be improved quite a bit.

Deathfire is using a first-person 3D role-playing environment, and I am glad that we can rely on the muscle of Unity to make sure that we do not have to limit ourselves because the technology can’t keep up. Unity may not be a bleeding edge engine, but it can sure play ball with the best of them, and the fact that it is so incredibly well thought-through, makes developing with Unity a lot of fun. More importantly, we can focus on creating the game, instead of the technology to run it on.

I know, you may have a lot of questions now, about the game. What, when, where, how… I’ll get to all that some time later down the line. For now, however, I simply want you to let the info sink in, and hopefully you’ll be as excited as we are. Visit this blog regularly. I plan on sharing more of Deathfire with you as time goes on. In fact, after some deliberation, I’ve decided that I will cover the development process like a production diary of sorts, right here on my blog. And also, don’t forget to follow me on Twitter (@GuidoHenkel) for a constant vibe-meter as to what I am up to.

Talk to you again soon…

16 Replies to “Going ahead with a new game — Deathfire”