As I’ve become more active in the games industry over the past months, %%% % % % I’ve also paid more attention to gaming related links, %%% % % % as you can imagine. No, I’m not going to talk about the Playstation 4 announcement. I will leave the hyperbole to others who have more panache for the upcoming new console from Sony. It leaves me pretty cold, to be honest, and the PS4 has virtually no new features I care for. I do not need game play recording and I certainly do not need a “Share” button. What I really need are better games… and those have nothing to do with faster hardware or higher pixel rates. All the game demo videos I’ve seen running on the PS4 do not impress me. I am hard pressed to really pinpoint real highlights where I’d say the graphic elevate the game play to new levels. It’s just all more of the same, just as little more orgiastic.

While I was following some game related posts on Twitter and Facebook, I stumbled across the website Kultpower, and I thought I’d let you guys know about it, particularly my German-speaking readers. This website has an online archive of many classic German computer magazines. You can find scanned versions of magazines such as Happy Computer, Powerplay, Amiga Joker and others. Every page of the magazines has been scanned and is available in fairly large format, making it possible to read all the exciting news of yesteryear, going back something like 1985 or so.

For me personally, it is just fun to go back and check out the articles and reviews of my old games, such as this first preview of the Realms of Arkania games. This article was written when we first made the announcement that we would bring famed the pen&pencil game to computers, revealing details and screenshots for the first time. As such this article is real computer games history, so make sure to click on the pages for a larger view. I hope you enjoy the read as much as I did. 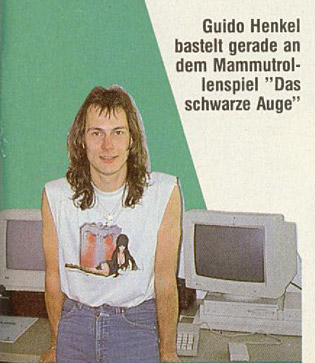 There are countless other gems in these archives, not to mention the small photo of myself from back then, posing in front of the top of the line computers back then – an Atari TT! Also note that the black box visible on the left side of the picture under the computer monitor was actually a development prototype of the Atari Panther, an ill-fated video game console that was cancelled and replaced by the Jaguar system before it ever saw the light of day. I had actually started development of a role-playing game specifically for that console when Atari pulled the plug on the hardware. Ah yes, good times…

Meanwhile, I am plowing away on my own little project here. I’ve spent a lot of time with Unity and since my last post I have decided to use NGUI for all my user interface needs. The package is absolutely fantastic and a real treasure trove. I constantly discover new features and things that are exceedingly helpful. For me, the $95 it cost me to purchase NGUI were well spent. Not only have I used NGUIs functionality throughout my current project, it has also offered me a lot of insight into effective Unity programming.

Another true gem that I’ve found is SceneSync, a Unity plug-in that allows collaboration of multiple people on the same scene. It is incredibly easy to use, plugs right into your project and works without a hitch. Combined with some version control system – I am using GIT for that purpose – it makes it breezily easy for people to work on the same project without risking to lose data or destroy one another’s work.

Because I found both NGUI and SceneSync so incredibly valuable, I am now constantly browsing the Unity Asset Store to see what other gems are lurking there. If you have any plug-in or script you can recommend highly, feel free to leave a comment below for me to check out.

So, what am I working on, you may ask? Well… I’m not going to tell you. At least not yet. Let’s just say for now that it includes Elves, Dwarves, Warriors, Wizards and such and a lot of virtual dice rolls.