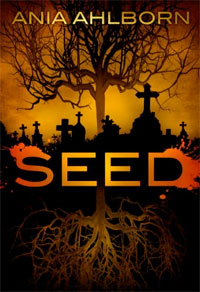 Today I would like you all to welcome Ania Ahlborn, author of the horror thriller Seed, to this blog, as she is tackling an issue that is not discussed in public very often: hateful reviews. Many authors will not talk about it for a number of reasons, because it is painful, because whenever you’re criticizing a customer’s review you’re dangerously close to sounding touchy and defensive, or for any number of other reasons. By talking about this subject, Ania not only touches upon this subject but she goes one step further and does so from a analytical point of view. It goes a long way to show how professional and serious she is about her work and I am proud to have her on my blog today. So, here’s what she has to say about the Vampire Reviewer.

There’s something to be said for book reviews. Many writers use them as a tool–a stepping stone to improving their writing. They listen to what their audience wants and try to figure out how to make the next book better. But not all reviews are helpful. If you’re a writer who has sold even a handful of books, you’re going to run into it: the dreaded one and two star review.

Believe it or not, this is what keeps a lot of writers as just that–writers, not published authors. There’s a very real and palpable fear in the writing community of being judged, and not just judged, but judged harshly. And while it’s definitely scary to put yourself and your work out into the world, stalling your own writing career because of that fear is downright silly. But writers do it all the time. They do it because of that one reviewer–the reviewer that’s overly harsh, overly critical, and less than specific about what they liked and didn’t like about a work of literature. Every writer has them. Stephen King has a whole army of haters. They’re vampires, and most of the time they huddle in the shadows not under the cover of night, but under the cover of anonymity.

Vampire reviewers huddle under the cover of anonymity

The fact that sites like Amazon and Barnes and Noble allow you to post anonymous reviews is a problem. Quite frankly, it shouldn’t be allowed. The second problem: reviews don’t have a word count requirement, and they should. The fact that people can post reviews without it being tied to them in any way, shape, or form, is basically giving that person license to be an idiot. And while some may say ‘what’s the big deal?’, if you’re a writer, it’s a very big deal. A single mindless comment can bring even the best of us to our knees.

I’m not saying that one and two star reviews shouldn’t exist. I’m a believer of freedom of speech, freedom of expression, and if you have an opinion, don’t be afraid to speak your mind. But with reviews, there’s a fine line between critique and critic. Critique puts something on the table, be it a comment on character development or plot. It offers the writer some incite on why the reader didn’t like what they read, and while even the most constructive criticism can sting, it’s at least helpful. The critic is the guy who tosses out one and two star reviews like they’re going out of style. They’ll say something like ‘this book sucked, I wouldn’t recommend it to anybody.’ How does that help anyone? It doesn’t offer a potential reader any incite on why the reviewer thought the work was bad; but worst of all, it strips the writer, for just the briefest of moments, of the hard work, the effort, and the dogged determination they put into that novel… and for what? For someone to shout ‘you suck!’ from the rooftops and run away before they can be identified.

I’m a firm believer that if someone isn’t a writer, there’s no way for them to truly understand how much emotion goes in to producing a piece of work. And then there’s the bravery part. Putting a novel up for sale on a site like Amazon, where anyone in the world can purchase it, read it, and judge it, is a hell of a task. It’s hard enough to be judged for any multitude of reasons throughout our lives. It’s even harder when that judgment doesn’t have a name or a face, or, quite frankly, anything constructive to say.

So the next time you’re ready to post a one or two star review, by all means go for it. But stop, take some time, and put some effort into that review, because the author very well may be reading it as soon as you post it, and that author is just as human and imperfect as you are. The only difference is that they’ve got their head on the chopping block, and you’re the one wielding the axe.

Born in Ciechanow Poland, Ania Ahlborn’s earliest childhood memory is of crawling through a hole in the chain link fence that separated her family home from the large wooded cemetery next door. She’d spend hours among the headstones, breaking up bouquets of silk flowers so that everyone had their equal share. She’s been drawn to the spookier things in life ever since.

Ania has been dabbling in fiction since the age of twelve. She attended the University of New Mexico, where she received her BA in creative writing. Seed is her first published work.

You can find Ania online at www.aniaahlborn.com

5 Replies to “The Vampire Reviewer: Under The Cover of Anonymity: Guest Post by Ania Ahlborn”