Every once in a while I pick up a book and as I start reading it, it turns into this revelatory, almost overwhelming, experience. Dos this happen to you, too, sometimes? You start reading and as you make your way through the book you go “How come I had never heard of this book before?” or “Why is not everyone talking about this book?” or something down the lines of “It is a shame this book is so overlooked, because it should be a best seller.” 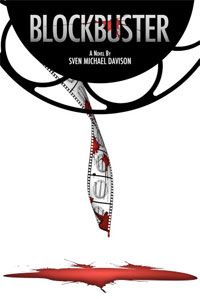 Well, guess what? It just happened to me again and the book in question is Blockbuster by Sven Michael Davison.

The book is an incredibly witty and irreverent take on Hollywood. In essence, it is the written equivalent to something like “Die Hard” — an action story that is superbly balanced with hilarious moments, great characters, cool action and everything else that makes some of those blockbuster movies so memorable — and more.

Imagine, a group of terrorists infiltrate and take over a major Hollywood studio and take everyone hostage, from the action mega stars, the diva directors, the writers, the crew, the assistants, all of mahogany row… everyone. Can you imagine the possibilities this scenario offers? I mean, rally? Why didn’t I think of that?

What makes this book even more irresistible is the fact how it pokes fun at Hollywood, its image, lifestyle, glamor, business, the people. In every paragraph would will find a little nod at a well-known movie, actor or director, and I love the way it is always disguised a little, turning it into a fun little guessing game every time a name or movie title is being dropped.

One might suspect that I am biased when it comes to this book, because Sven and I go back some 10+ years, but I honestly do not think so. In fact, Sven and I have been working in Hollywood at the same time, and that’s how we met, because he used to be one of the head honchos creating DVDs for 20th Century Fox Home Entertainment. Yes, my friends, if you own any Fox DVD that was released between 1998 and 2009, you can bet your sweet bottom on it that Sven had a hand in it, if only to call up the movie’s stars and book them to record a commentary track or to film an interview featurette or documentary.

And that is just the thing. Sven knows Hollywood inside out. And it shows in his book. There is an authenticity to his story that I can fully attest to. As I said, Sven and I have worked Hollywood during the same time period and I am very familiar with the people, the biz, the lingo, the status symbols, the facade, the schmooze, and so forth.

When Sven describes the circle of assistants, each of whom is trying to get their own project off the ground, each of them using the other to serve as a front for potential investors, it reminds me of the way the game is played in Tinseltown.

When he names his assistant characters with names like “Delicious” or “Botswana,” it may sound funny at first, but interestingly enough, for some weird reason, these are exactly the kind of names you find in the front offices of movie executives.

But it goes much deeper than that in the book. The way people talk, the way they carry themselves, the self-conscious way with which they behave is all too real. Add to that the level of detail Sven puts into adding little nuances about the security guards, the layout and design of the studio lot, the made-up history of his Mogul Studios, or the love for the subject matter when his characters geek out over high-end equipment, and you get a feel for what Hollywood is really like. It may scrape off the pink dreams you may have had, but always with a wink in his eyes, Sven reminds us all that making movies is a business — nothing more and nothing less.

The thing that struck me most from the first sentence, however, was Sven’s use of language. His opening chapter describes the shoot of a blockbuster movie and like the movie itself, his vocabulary is completely over the top. It is the same popcorn-style writing. Absolutely hilarious and off the wall. Rich with adjectives and metaphors, immediately bringing to your mind images of some of the greatest action movies you’ve ever seen.

Then the style changes, as the story moves away from the set and settles into a more realistic tone that is nonetheless as energetic as a sprite, filled with pixie-dust and wonderful wordplay. I found myself relishing every sentence I read.

Anyway, before I get too carried away, as I said in opening, I was completely floored by the book. I had promised Sven to read it some time ago but it took me months to actually get around to it. Boy, do I regret that now. The book is like a fresh breeze.

Do yourself a favor, grab the reading sample on Amazon and check it out. If you are a movie buff or simply someone who enjoys movies for a little escape, you simply owe it to yourself to check Blockbuster out. I guarantee you, the first chapter will hook you completely! To me, Blockbuster was like a kick in the butt, forcing me to face the question, “Will I ever be able to write a book as cool as this?”

One Reply to “Blockbuster – where did you hide?”