Today I feel like talking about something completely different. As many of you may know, I am a musician also. I have played in heavy metal bands during the 80s, I composed, arranged and recorded orchestral scores for computer games in the past and even though I can play a variety of instruments, the guitar has always been my instrument of choice.

The other day I realized that while there are many great guitar gods we have come to know, featuring names like Jimi Hendrix, B.B. King, Steve Vai, Eric Johnson, Eddie Van Halen, George Lynch, Eric Clapton, Robben Ford, Jeff Beck etc. it turns out that most of these are playing as the single guitarists in their respective bands where they can fetch all of the spotlight. Guitar duos on the other don’t always get the recognition they deserve.

Therefore, I decided to take a look at some of music’s greatest guitarist pairs and why they should, in fact, be more celebrated. 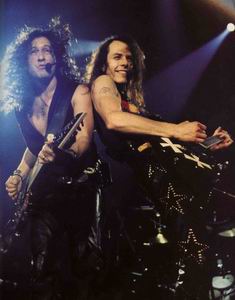 The top of the list was very, very easy for me to pick. Chris DeGarmo and Michael Wilton of Queensryche are easily the most noteworthy guitar pair, because they have redefined how rock guitar arrangements are being made. With their album Operation Mindcrime, they treated guitar arrangement with such subtlety that it turned into a multi-layered masterpiece and a masterclass for any guitar duo trying to use clustering in order to make the most of the instrument pair-up. A tighter pair than Chris DeGarmo and Michael Wilton you will hardly find in any band.

John Lennon and George Harrison of The Beatles are my second choice. Vastly underrated, George Harrison was a phenomenal guitar player who always played off and expanded upon Lennon’s more straight forward playing. He added depth and nuances to melodies that could have turned out absolutely banal, but were enhanced to become musical classics as the two guitars create sometimes hauntingly beautiful voicings.

Glenn Tipton and K.K. Downing of Judas Priest. Constantly overlooked, Tipton and Downing are without a doubt one of the most accomplished guitar duos in the heavy metal scene. No one plays like these guys do and few guitar players mesh the way they do. Not only do they trade lines like there’s no tomorrow, the fact that they each have very unique styles adds incredible richness to their music. Tipton has a tendency to break the metric barriers of their music by playing odd-beat runs against standard rock grooves while Downing would provide chord voicings that were eerily catching yet surprisingly complicated and multi-layered.

Angus and Malcolm Young of AC/DC. The band’s music may be spartan in many ways and lacking the versatility of some of the other contenders but let’s get one thing straight. Angus and Malcolm will ALWAYS make your foot tap. Here it is Angus’ exceptional syncopating of chords and lines that contrasts wonderful with Malcolms equally syncopated play that makes the magic work. The secret of these two guitarists is the fact that they use different phrasing and syncopation while often playing similar lines. When one guitar stops, the other will fill the moment of silence, only to bounce around and then pause to make room for the other’s guitar line. It is a constant back and forth between these two players, creating an incredibly dynamic sound that translates directly into brutally addictive grooves which have served the band well for over 30 years.

Brothers Mark and David Knopfler of Dire Straits were an equally contrasting pair. Sadly, David left the band fairly early in their career but the first few albums show just how wonderful David’s laid back strumming contrasts with Mark’s sharp syncopation and picking techniques. David provided the wool while Mark provided the colors to the tapestry of music that is Dire Straits’ hallmark. 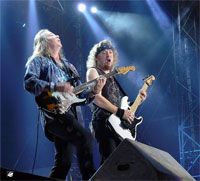 And then, of course, there are Dave Murray and Adrian Smith from Iron Maiden. Those guys make magic with their guitars, perfectly complementing each other with their different styles. While Murray’s sweeping legato play is perfect for the more lyrical aspects of the band’s music – delivered always with a big smile on his face which makes even the most complex run appear so simple that anyone could do it -, Smith is an aggressive metal player with a razor-sharp sound and shredding capabilities like the best of them. With your eyes closed you can immediately pinpoint who is playing which part and together they create musical contrasts that always stay fresh and have defined Iron Maiden every bit as much as Steve Harris’ bass play.

For me, the list would not be complete without the addition of at least one Thin Lizzy line-up. To me, Scott Gorham and Gary Moore have always been the penultimate pair-up in the band’s history. Thin Lizzy was one of the first bands to fully explore two-guitar harmonies and they took it to a new level that was unheard of before. Skillful in both technique and arrangement, they always surprised as the players played off each, meshed for a bit, only to play off each other again. The songs themselves were perfectly arranged with big voicings that gave each guitarist their unique place in the whole. 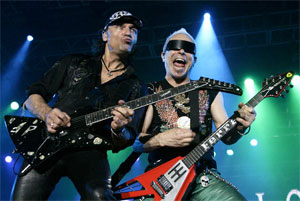 Germany also produced one of the most remarkable guitar duos, Matthias Jabs and Rudolf Schenker of the Scorpions. Hardly anyone thinks of these guys when they talk about guitar line-ups but if you ever listened to “Blackout” through headphones you know that these guys were kicking in a league of their own. Schenker is the perfect rhythm machine. He has groove like few others do as he hammers out the band’s trademark chord progressions. Jabs sits squarely at the other end of the spectrum. He highlights the rhythm that Schenker laid down with unbelievably inventive fills. Jabs is always working, always running all over the fretboard, always ready to surprise with another harmonic squeal or a fast run that will steal your breath. If you love guitars, you have to love the Scorpions. At the time they were like a blast of fresh air in a genre that had become very formulaic in its approach to arrangements. 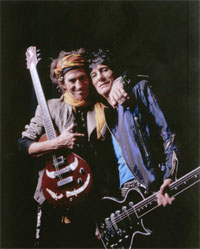 And then, last but not least, there are Keith Richards and Ronnie Woods of the Rolling Stones. I debated with myself for some time whether to include them or not, but despite the simplicity of their songs and despite the recurring themes, these guys do their thing like no one else. Together they create that unique Stones sound. Woods is the guy who lays down the foundation with a series of easy-going chords, but it is ultimately Keef’s contribution, the slurred play, the strange voicings and his unique sense of timing that give it the polish that makes their music stand out above anyone else.

I know, that no list can be complete, and I also know that I have forgotten many shining examples, no doubt. The moment I press the “Submit” button I will probably slam my palm against my forehead going “How could you have forgotten,” but let’s leave it at this for now.

I want to point out however, that I have deliberately omitted the pair-ups of bands like Metallica, Pantera, Megadeth, Slayer, and others because I feel they are not remarkable enough as a unit. While successful, and often exceedingly accomplished players, I felt that none of these were really that outstanding in terms of how the two players complement and contrast each other. How their interplay is so unique that it becomes timeless or impossible to imagine that they would sound the same if one of them would be replaced. When everyone is essentially playing the same thing and/or has the same kind of phrasing and style, they become interchangeable, which I think is the case with these aforementioned bands.

Some of you may also note that virtually all of these pair-ups are from rock bands. The thing to note about that is that rock’n roll is really the home of guitar-centric music and guitar pairs. Most other music genres like blues and jazz, funk or fusion combine the guitar with other instruments or treat them more as solo instruments, but never in the same powerhouse paired fashion as rock music does – hence the bias. no matter how hard I tried I simply could not name a country band where a guitar pair and their players were of any any real import, and neither could I think of anything in popular music where the guitar has been relegated to a filler status or an effect.

Either way, I hope you enjoyed this little line-up and maybe you will have the chance to check out some of the guys on this list if you’re not familiar with their work.