It has been some time since I last posted an update here, and I apologize, but the last weeks were just crazy full of things that required my attention. During this time a lot of things were going and I’d like to recap some of it for you here, in case you missed it.

First and foremost, Fangoria issue #302 is out! On page 74 in the magazine you will find the first installment of the Jason Dark serial Food for the Dead that I write exclusively for the magazine. Over the next five months you will find a new installment in the serial in every Fangoria issue. so, if you haven’t grabbed your copy yet, run to your nearest newsstand NOW and get it. As you will see, “Food for the Dead” is truly in the vein of the other supernatural mysteries featuring this occult detective. It has the Victorian London setting, graveyards with the dead rising from their graves and it features a major cameo by one of the genre’s most notorious villains. Hey, how could you say “No” to that, huh? So, again, let me hammer thins into your heads… go, buy your issue of Fangoria before it disappears and you missed the first installment of the series!

Another interesting development over the past weeks was that I made another guest-appearance on thriller writer J.A. Konrath’s blog. As many of you may recall, in February I wrote a guest-blog for Joe, discussing how I promoted the Jason Dark series since its inception and how many of the promotional tools I had employed just didn’t work out the way I had hoped. The blog post generated a lot of feedback and as you know, I revamped Demon’s Night, the first Jason Dark mystery from scratch, taking many of the comments and suggestions that were offered in response to my blog post in an attempt to turn it into a better product. I also wrote about it in more detail here on my own blog. 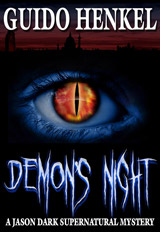 With all that in mind I went back to Joe Konrath’s blog and outlined the changes I made and — since some time had passed since the release — I also detailed the impact these changes had had on the actual sales of the book. I am sure, many of the readers were surprised that the result was essentially zilch. Five weeks after the reboot of the book and the price drop to 99 cents, the book has generally not been selling noticeably better than before. Naturally, there was a large spike on the day of the blog post on Joe’s website that elevated the book up into the Top 5,000 for an hour or so, but just as quickly as it had spiked, it also reverted back. So, ultimately, I see the “Demon’s Night” experiment as a failure. While I am glad a did another revision of the book itself, resulting in tighter and better writing, all the effort I put into the creation of a new cover etc. was in essence wasted time. Time, that I could have put to better use, writing a new book. Well, hindsight is always 20/20, and it was definitely wroth the experiment, I guess, if only to support my theory once again that 99 cents is not a desirable price point.

Interestingly, during the time period that I revisited “Demon’s Night,” it was actually reviewed by Red Adept. Since the early days of the kindle, Red Adept has been one of the most visible reviewers of eBooks and over time she has reached a stature that is unique among eBook reviewers. I am no exaggerating when I say that I sighed in relief upon seeing the 4.5 star rating. See, I had sent the book to Red Adept for review about a year ago — yes, that’s how long the review queue seems to be — and as a result, it was the version before my rewrite. To see that even that version impressed a 4.5 star rating upon the reviewer, is more than I had hoped for. Of course, I wish she had read the new version, but such is life. The only criticism leveled against the book was in the writing of the book — all things I have thoroughly addressed in the recent revision. It makes me wonder if it would actually have been possible for “Demon’s Night” to get a full 5-star rating at Red Adept if the timing had been a little different. Ah well… 4.5 stars is pretty awesome, too, and I am a very happy camper.

If there are any reviewers out there, reading this, feel free to drop me a line if you are interested in checking out the new version “Demon’s Night” or any one of my other books.

It appears that my series on eBook formatting has become a major draw here on this blog and not a day goes by where I don’t receive an email or comment post with formatting related questions. Since this seems such a hot topic, and since a lot of people seem to come to this blog for that tutorial in particular, I have set up a box in the upper right hand corner that links directly to the tutorial, because with new posts pushing the eBook formatting series further and further back, it actually became a little tedious to locate. So, now you all have a nice quick link on every page. How do you like that?

The series has also led to a few contract projects. I have just completed an eBook formatting project for a major New York Times best selling author that I think looks like a million bucks. If you want me to handle your eBook formatting, feel free to get in touch and ask for a quote.

Now back to my current work in progress. Did I mention that I started writing a modern-day thriller? Well, now you know…