Last week I went to Las Vegas to visit CES, the Consumer Electronic Show. It is kind of an annual migration for me, to go to the show and see all the latest technical developments and gizmos that we can expect to hit the market in the next months. Interestingly, this year, the show was pretty much underwhelming on the entire front.

While TV manufacturers tried to dazzle visitors with their hot new 3D technologies, the sad fact of the matter is that the technology is simply not there for the living room yet. Not only did all displays flicker horribly but they seriously lacked real visual depth and dimensionality despite the 3D efforts, they lacked resolution and most importantly they lacked appeal. The glass-less 3D efforts were even more painfully unsatisfactory, as the 3D effect was only achieved when standing in a small sweet spot straight in front of the display, and even then, the effect was lackluster at best. Everyone else saw double-images as a result of the lenticular coating of the displays. If this is what the consumer electronic industry wants to sell to consumers, no thank you.

The other fad that was evident all over the show were tablets. They were all over, I mean, everyone and their mothers displayed they cool little tablet. Some of them were so close to the real deal — speak, the iPad — that you had to look twice, and frankly in those cases, the question immediately becomes, why would anyone want that? There is the original, and it’s perfect… Most of these tablets were powered by Android operating systems, so a solid variety of apps and tools should be available right off the bat, though their quality might be dubious at best.

That, in essence, was CES this year. Companies trying to sell us pretty bad versions of stuff we already have. Innovation was noticeably absent, as were really interesting new trends.

One thing I noticed while walking the show floor, however, was the abundance of eBook readers. Not too long ago, Amazon’s Kindle was the only kid on the block, until a few major players decided it was time to challenge Amazon’s king-of-the-hill position. They are all still struggling to catch up in terms of hardware, sales, catalog and ease of use, but they keep trying nonetheless, and rightfully so, as it is a market that will show some significant growth in the next years. 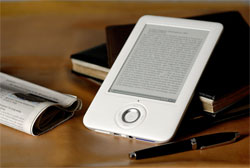 It was interesting to see how many Chinese manufacturers had eInk eBook readers on display, looking for American distribution. Some of these devices looked rather slick, but a closer look often revealed major flaws. I was not so much turned off by the fact that many of them targeted a $200 price point for a barebones wifi reader, because an American distributor will quickly set them right in their expectations by laying out the current pricing in the market for them. What I did notice, however, was a distinct lack in quality. Some readers were exceedingly clunky and bulky, others were as slow as a Kindle 1, and others yet had a user interface that would have made Steve Wozniak cry on the apple II.

I also saw some bizarre hybrids, where manufacturers created devices that featured an eInk screen on one side and an LCD screen on the opposite side. The device would then be flipped open and closed like a laptop. The problem here was that the device was about twice as thick as any laptop in the market, weighed the same as a laptop but offered significantly less functionality than a laptop. Why anyone would want to replace something clunky and heavy but versatile with something even clunkier, heavy but less versatile, I am not sure. Evidently the makers of these devices had other thoughts on the subject, so who am I to talk? 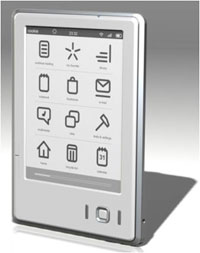 In the end, however, a trend is clearly visible. eBook readers will flood the market before long. Will they all succeed? Not likely. The reason the Kindle is so successful has mostly to do with Amazon’s marketing muscle and distribution network. At this point no one — and I mean, no one — can rival that in any way and I do not see that change in the foreseeable future.

As brick and mortar stores like Barnes & Noble or Border’s try to take a shot at Amazon and have some success stories to tell, the fact of the matter is that they will have to undergo serious corporate restructuring in the face of the eBook revolution. This will affect them on every level of their service spectrum, including digital distribution and their advertising budgets, and it will have an effect on their ability to compete with Amazon, who does not have any of these problems. Other distributors trying to break into the ebook market have stigma attached to them, like Google, where both readers and authors start to get wary whether it is a good idea to let Google do their thing, especially since Google is extremely inflexible and controversial when it comes to some of their distribution agreements.

When all these eBook readers that are being created by countless companies around the globe will hit the market, there will be a great rush, no doubt — especially on the lower priced ones. It may help distributors like Kobo to jump into the breach and carve out a really good market for them, but I still doubt that the impact will be nearly as big as people might expect.

As long as people will need to connect their eBook readers to a computer, have to potentially deal with driver problems, manually transfer books from the computer to the device, and so forth, there will be a huge barrier of entry. Even worse, the overall experience — or lack thereof — may actually turn people off and convert them back to print books. The process has to be painless and easy, the experience pleasant and enjoyable, otherwise, no dice.

There were many reasons why the iPhone was such a smashing success and among the factors playing into it was the fact that it tightly integrated into iTunes. While iTunes may not be a lot of fun for PC users — but then, what is? — on the Mac it is pure elegance and makes syncing, saving, transferring and purchasing content a breeze, integrating seamlessly into the traditional workflow. Add to it the capability to browse and purchase content straight from the device, and you know, why it took off so quickly.

It also gives you a notion, why the Kindle took off the way it did, despite its initial $300 price tag. It gets it all right and unless the upcoming import eBook readers can offer the same kind of ease of use, immediate accessibility and variety of content, I am sure the Kindle will only continue to be the guiding light for the entire industry.

4 Replies to “A few impressions from CES”