One of the most challenging moments in the writing of a book and its preparation for publication is the creation of the synopsis or flap copy as it is often called also. The reason is easy to understand. It is a short blurb that will make all the difference whether a prospective reader will actually find the book interesting enough to continue and pay for it. Right after the cover the flap copy is easily the most important driver to turn curiosity into an a sale.

Publishing houses usually have dedicated copywriters to compose these flap copies for them. These writers are specialists in squeezing a maximum of intrigue out of a few sentences. Make no mistake: copywriting is an art upon which many millions of dollars can hinge.

Naturally, when the time comes for me to compose flap copies for my books I always try to spend some extra time on it. While creating the copy for “Terrorlord,” the latest volume in my “Jason Dark” series, I thought I’d put all of my resources to work and ask a few of my closest writer friends to chime in and help me massage the text.

Here is what I started with.

Conjured up from the bowels of the abyss by ancient spells, the Terrorlord has only one desire — to open the Seven Gates of Hell and unleash upon mankind a terror beyond imagination. He will do what it takes and kill anyone in his path remorselessly.
To save mankind from the horrors they don’t even know is upon them, the Geisterjäger Jason Dark and Siu Lin have to confront the evil darkness themselves and stop the Terrorlord before his reach is growing too far and his powers become unfathomable.

I thought it was pretty good but I would soon learn that I clearly made some cardinal mistakes.

The first comment was that there was clearly too much hyperbole in the description to the point that it became detrimental. Someone else also suggested that it was lacking depth. What is a Terrorlord, the question arose, and the consent that the description lacked a true emotional hook.

I could see all these points and reworked the text to this.

Conjured from the bowels of the abyss by ancient magic, the Terrorlord has one desire — to open the Seven Gates of Hell and unleash the horrors of the undead upon mankind and devour our world in his evil blackness.
Reliving the nightmares of his youth where an encounter with the Terrorlord left him scarred for life, Jason Dark must once again confront the powerful gatekeeper from Hell before his reach and power spiral out of control. 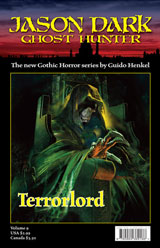 I did not elaborate further on the explanation of the name “Terrorlord” because I really felt that the name was enough to paint a picture, particularly if you take into consideration the cover artwork that would accompany the book. Take a look at the image to the left and judge for yourself. Apart from that, however, I definitely tried to make the synopsis stronger than before and to relay a bit more information – too much information, perhaps.

The comments on this one were that the first sentence in particular was too convoluted, running on with too many verbs – opening, unleashing and devouring. Yes, I could see that. It was a bit clumsy, indeed.

Complemented with the standard boilerplate second paragraph that provides information regarding the time period and setting of the story, I finally decided to go with the following text.

Conjured from the bowels of the abyss by ancient magic, the Terrorlord has one desire — to open the Seven Gates of Hell and unleash the horrors of the undead upon mankind.
Reliving the nightmares of his youth where an encounter with the Terrorlord left him scarred for life, Jason Dark must once again confront the powerful gatekeeper from Hell before his reach and power spiral out of control. With the help of Siu Lin, the ghost hunter will have to put an end to the Terrorlord’s dark reign before he can devour our world in his evil blackness.

This is the ninth volume in a series of gothic horror adventures where Jason Dark, a fearless and resourceful ghost hunter, follows in the mold of a Sherlock Holmes combined with Randall Garrett’s Lord D’Arcy. Written by Guido Henkel, the designer who brought Germany’s famed “Das Schwarze Auge” series to computer screens, this series is filled with enough mystery, drama and suspenseful action to transport you to the sinister, fogshrouded streets of Victorian England. Your encounter with the extraordinary awaits.

As you can see, I hope, creating a powerful flap copy is not as trivial as it may appear at first. Even though I may have ended up with a decent enough synopsis through this process, part of me truly wonders what a professional copywriter would be able to come up with.