This week a new animated movie makes it to theaters, taking a humorous look at the world of pirates. Aptly titled The Pirates! Band of Misfits you may have seen the trailer of the movie flicker over your television screen for the past weeks. If not, well, all is not lost – here is a look at the trailer for you.

This film is an old-school stop-motion film, created by the same people who made the Wallace & Gromit shorts and movies, as well as the movie Chicken Run, in case you remember that one. So with that in mind, I think it is a sure bet that “The Pirates!” will be a fun film that is enjoyable for the whole family.

Why am I pitching you on this movie, you wonder, no doubt. No, I did not work on the film, I did not write it either and no, I did not appear unit nor did I voice any of the characters. I did, however, write a Pirate book for children some time ago, and I felt this was as good a time as any to remind everyone of it. 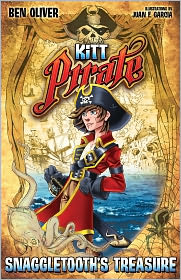 Called Kitt Pirate: Snaggletooth’s Treasure, my book is a chapter book adventure story for 4th graders, in which a young pirate captain is trying to hunt down a legendary treasure. The adventure is fraught with peril and surprises, as it keeps young readers enthralled, and has been reviewed very favorably by readers and school librarians.

“And why does it say Ben Oliver for the author?” you may wonder when you look at it. Rest assured, I did not direct you to the wrong book. Ben Oliver is a pen name that I adopted for the book, because I did not want children to accidentally stumble across all my horror books the first time they type in the the author’s name in Google or so.

So, if you want to get your kids in the mood for the movie, or if you want them to be able to follow up the movie with some additional children-friendly pirate fare, Kitt Pirate might be a great pick for you — not to mention that your purchase would make me very happy. It is available as a paperback, as well as an eBook for all conceivable eBook readers.

Here are some quick access links for you to find the book.