If you’ve been following my blog or my Twitterstream, you will be aware that I’ve recently finished a new Jason Dark story. I began writing this series of supernatural mysteries taking place in Victorian England about 3 years ago. Revolving around the occult detective Jason Dark — kind of a Sherlock Holmes character facing paranormal cases — and his cast of sidekicks that includes Siu Lin and his friend Herbert, I’ve always been attracted and intrigued by the possibilities this series offered to me as a writer. 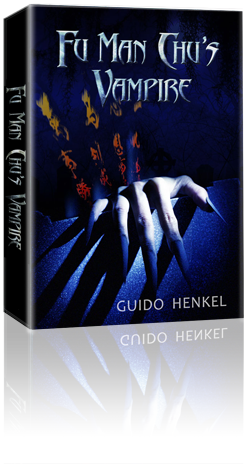 The most recent adventure, the eleventh in the series, is a perfect example, why. Titled “Fu Man Chu’s Vampire” the title alone says it all. I love to have fun with my stories. It gives me tremendous pleasure to take things that we are familiar with and give the my own spin. Like Doctor Fu Manchu, the criminal mastermind, brought to life by Sax Rohmer in 1912 – though it was first published in 1913. Fu Man Chu made a personal appearance in a previous Jason Dark adventure named “From a Watery Grave,” but only as a somewhat peripheral character that advanced the story. To celebrate the nefarious mastermind’s 100th anniversary, I felt it was time to put him the spotlight of one of my stories, and the idea for “Fu Man Chu’s Vampire” was born.

I already foreshadowed the story in Jason Dark’s tenth mystery, “Curse of Kali,” but I have to be perfectly honest that at the time I wrote those foreshadowing scenes, I had absolutely no idea where I would eventually go with the actual story of “Fu Man Chu’s Vampire.” I just knew that I wanted to do something.

It all changed when lightning struck me in early November — figuratively speaking, of course. In one sparkling moment, just after Halloween, I suddenly knew how I could develop the story. I had the germ for a unique approach to the story, something that would make sure it’s not just another vampire story, and the key how to make the Jiang Shi, the hopping Chinese vampires, truly formidable opponents.

I kept the idea in my head for three days, trying to turn it down, because I had decided some time earlier in the year not to write any more Jason Dark stories for a number of reasons. You can’t keep a good idea down, though, and it just begging. There was a time when the idea teased me with cookies and even bribed me with the promise of riches. Like I would fall for that…

Be that as it may, I finally gave in. I just wanted to write this story so badly. I decided put everything else aside and began to write. After twelve days, the story was done. That is the fastest I ever completed a Jason Dark story. Traditionally, it always took me about twice as long, but this one just begged to come out. With minimal pre-planning, I simply wrote the story from beginning to end. That in itself is very unusual for me, as I have a tendency to write my books out of order. Ordinarily, I write whichever scene I feel like at any given day. But in this case, it was truly like telling the story from beginning to end. I knew exactly where I wanted to go and I went for it.

Interestingly, “Fu Man Chu’s Vampire” also turned out to be the longest of all Jason Dark adventures so far. In fact, after my fourth draft, it was about 25 percent longer than the other stories, and the final editing add even a little more bulk to it. So, it is easy to see that I enjoyed writing it, as there was none of the struggle that usually accompanied the other adventures — to some degree, at least.

Ultimately, it is a reflection of the plot, I think. I wanted to present Fu Man Chu as a larger-than-life villain without him being an entirely supernatural creature. He is, after all, a human. Fortunately, the titular vampire is not and the teaming up of the two allowed me to do some really cool things.

As with all the Jason Dark supernatural mysteries, I also wanted to add some nice drama and unexpected turns to the story to show off my cast’s abilities, strengths and weaknesses. I’d love to tell you more about how Siu Lin … oops, sorry, I am evidently not at liberty to tell you details. You will have to get yourself a copy and read the story. 🙂

Take it from me, though, that it is a fun ride and the fact that I had a blast writing it should, in theory, be reflected in the writing — or so I hope.

Get yourself a copy of the book now for only $2.99 on Amazon, Barnes&Noble and Kobo for all your favorite eBook reading devices. And if you don’t own an eBook reader, you know, of course, that you can download Kindle software or ePub readers for pretty much any gadget and computer for free.