I have gotten quite some response on my first entry in the “Take pride in your eBook formatting” series, according to my blog counter, inspiring me to make sure to bring you the next installment shortly. It is nice to see that so many people seem to take an interest in the subject matter, especially since the technical side of eBooks is so vastly overlooked. I mean, companies like Smashwords actually actively discourage authors from creating proper eBook files by not allowing them to upload individual files and instead forcing their Meatgrinder upon everyone, a technology that – in its current state – does nothing to improve eBook quality and typically makes things incomprehensibly worse. It honestly boggles my mind that Smashwords insists on using their own technology, broken as it is, instead of allowing authors to upload their properly optimized eBook files to their servers, especially because it would solve many problems for everyone, including Smashwords themselves. But I guess corporate pride is something you just can’t go against, especially not if it is truly the only halfway tangible asset a company has. But enough of that, I’m not here to diss other companies. Not on this day. 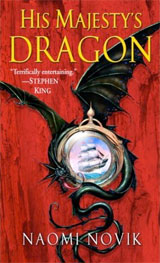 No, I’m here to tell you that I just finished “His Majesty’s Dragon” and am in love with it! How could I have overlooked this series for so long, I wonder? How come this book is not on everyone’s lips and hasn’t already been turned into a movie? Since Hollywood seems to struggle finding new ideas – or why else would they remake every film in their library, even the ones no one’s ever cared about – how come a story like this has been left untreated so far? It is a book for all ages and even my 10-year old son already claimed interest in it.

To me, “His Majesty’s Dragon” was the perfect marriage of C.S. Forrester’s “Horatio Hornblower” series and something like Anne McCaffrey’s fantasy stories. I found it amazing with which ease Naomi Novik managed to create an alternate history the is larded with dragons – mythical fantasy creatures, let’s not forget – and makes it all seem so real. The events ring absolutely true and when she talks about the battle at Trafalgar and how dragons tear into the tall ships, burning their sails with their fiery breath, there is not a moment at which I ever felt cheated. In Novik’s world this rings absolutely true, and suddenly the battle between France and England becomes so much more potent. When Napoleon is launching an invasion upon England, leading up to it with a nasty trick that leaves the English seriously weakened, suddenly the reality sets in that with the aerial support of his magnificent dragon corps, he actually does have a chance of success.

I remember that I stopped reading at that point for a minute and began to think to myself through the consequences if Bonaparte really had succeeded in an invasion, and I began to wonder if, perhaps, in Novik’s alternate history version this would really happen. How would the world in which Temeraire and Laurence live look like if suddenly they found themselves on the side of the conquered. The possibilities were endless… but I won’t tell you how Novik masterfully deals with it. You will have to read it yourself. And read it, you should! 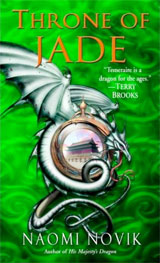 The story begins when an English ship of the line defeats a French one and finds among the prize a dragon egg. The egg is about to hatch, but unfamiliar with the proper procedures, the ship’s captain, Laurence, is the one person the dragon speaks to, allowing only Laurence to harness him. Through this process of harnessing the dragon, a bond is created that will last a lifetime. Laurence names the dragon Temeraire, and as the animal’s master, Laurence has to leave the naval services, a thought he does not like, and become an airman, part of a group of people who get little respect from the general populace or the rest of the military. He has to go through rigorous training with Temeraire to prepare the dragon as well as himself for a life of the King’s air force. Very quickly, it becomes obvious even to Laurence that Temeraire is not an ordinary dragon. Extremely smart – and better at math than Laurence himself – Temeraire not only looks and thinks differently than other dragons, he talks different languages, too, and before long, a specialist identifies Temeraire as an exceedingly valuable, rare Chinese breed.

As the bond between the dragon and the captain grows, the two become inseparable and prepare to go to war against Bonaparte’s army. It is an adventure for both of them, the young dragon with boundless energy as well as the hardened seaman who finds little of his naval experience has value once in the air. 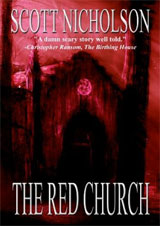 I found it impossible to put “His Majesty’s Dragon” down. It pulled me in like few books do and I am glad it is part of a series. That way I can continue visiting the world of Temeraire even though I am finished with this one book. I can’t wait to continue with the next one, “Throne Of Jade,” but before that I have decided to read Scott Nicholson’s “The Red Church.” It is a book I’ve wanted to read for quite some time and since I consider Scott a friend, I think it is about time to give this book its well-deserved turn.